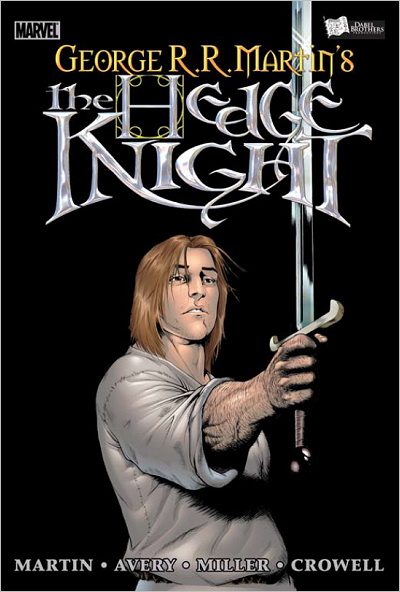 One of the most exciting moments of my career came when I was contacted to write a sample try-out script for the adaptation of George R.R. Martin’s The Hedge Knight, and I was selected for the job. Mike S. Miller, the artist on the project and a friend of mine, got me the opportunity and Mr. Martin liked what he saw. Forunately for me, what I tried so hard to do was what Mr. Martin liked the most: I tried to make it as true to his original as possible. He made it easy, as his background in television honed his ability to write only dialogue that was necessary and sharp. So for me, it was something of a puzzle: how to take a great story with great dialogue and make it work for the comic page. After that, Mike took the script and made it look great. Mike is able to take my script and draw a comic that looks better than I imagined when I originally wrote it.

The sequel to The Hedge Knight, The Sworn Sword, was published by Marvel Comics. Mike and I were still a team on that book, and once more the same thing happened. Mr. Martin’s story was amazing, and Mike’s art was amazing. And I got to go along for the ride.

There IS a third Hedge Knight story, and I’ve heard the rumor that Mr. Martin is writing a fourth. Will there be a third and fourth graphic novel for Dunk and Egg, the knight and squire that are not at all what they seem to be? I hope so.